Jay-Z, Byron Allen Among Those Interested in Acquiring Washington Commanders 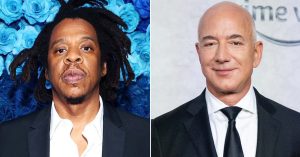 Earlier this month, Dan Snyder, who has owned the D.C-based NFL team since 1999, hired Bank of America Securities to consider potential transactions. The purchase price being bandied about is somewhere in the neighborhood of $5 – 7 billion dollars, though it is unclear as to whether or not the bids are for a minority stake or ownership of the entire team.

According to multiple reports Jay-Z may be partnering with Bezos on a bid. The two were recently seen together at a swanky Hollywood restaurant presumably to talk “Commanders” business.

A-list actor Matthew McConaughey is also reportedly looking to get in on the action with an offer according to the Washington Post. McConaughey—a longtime fan of the team—would either join an existing investment group or form his own.

Byron Allen—who had hoped to acquire the Denver Broncos earlier this year in a move that would make it the NFL’s first Black-owned team—is also preparing a bid.

Bezos is said to be a frontrunner due to not only his net worth as well as the fact that Amazon holds the rights to “Thursday Night Football”.