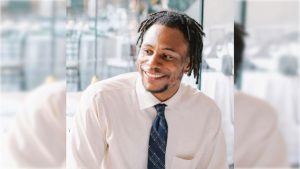 Keenan Darnell Anderson begged for his life as he was repeatedly tased by LAPD officers after a confrontation sparked by a traffic accident he admittedly caused as they attempted to take him into custody.

LAPD officers reportedly tased the 31-year-old Washington D.C.-based schoolteacher six times and for a troubling 42 seconds as he cried out, “they’re trying to George Floyd me” in the January 3 incident.

Taken into custody, Anderson—the cousin of Black Lives Matter founder Patrisse Cullors— died several hours later of cardiac arrest after being transported to the hospital in a medical emergency.

The case, which marks the third fatal police shooting in a span of ten days has called into question the L.A. Police Department’s policy on the use of tasers.

LAPD policy states that officers “may use the Taser as a reasonable force option to control a suspect when the suspect poses an immediate threat to the safety of the officer or others.”

LAPD Chief Michael Moore said,” We still do not understand his medical condition and the department is pursuing through investigative channels his medical records and the actions taken and the underlying influences of what resulted in his death.”

“Regarding the use of the taser, our department policy states that there is no pre-set limit of the number of times a taser can be used in a particular situation. However, officers should generally avoid repeated or simultaneous activations to avoid potential injury to the suspect.

To that end, my preliminary understanding of this incident is that the involved officer believed each activation was achieving some level of compliance only to be followed by renewed resistance when that activation ceased”.

A preliminary toxicology performed by the police and tested positive for cocaine and cannabis.

Moore went on to state that more information from the coroner’s office was needed to accurately determine the cause of death, while adding that Anderson had been in an altered mental state as the officer attempted to deescalate the event.

“In my preliminary view of this incident”, Moore said, “its’ unclear what role the physical struggle with the officers and the use of the taser played in his unfortunate death…As this investigation continues, I will pay close attention to the use of the taser.”

The use of tasers has long been one of the more controversial issues in criminal justice.

In 2012, Amnesty International urged stricter limits on police taser use as the U.S. death toll reached 500, as the shock delivered to the chest by a Taser can lead to cardiac arrest and sudden death.

A Stanford study suggested that “prolonged and/or multiple use of a taser dramatically increases the risk of ventricular fibrillation and consequent cardiac arrest, even in healthy adults”.

“I think what’s most important for people to organize around right now is ‘no cops at traffic stops,'” said Cullors. “My cousin would be around right now if he hadn’t had a police encounter. Professionals who know how to deal with a crisis should’ve been at that scene.”

L.A. Mayor Karen Bass also questioned the absence on the scene of a mental health expert.

Bass is pledging that the investigations will be transparent and reflect the values of Los Angeles.

Said Bass, “I will ensure that the City’s investigations will drive only toward truth and accountability…I have absolutely no tolerance for excessive force.”

Youngsters look on during the Lunar New Year event at the Boys & Girls Club of West San Gabriel Valley January 26, 2023. The event was held to promote healing and bring the community together in light of the recent mass shooting this past weekend in Monterey Park.(Photo by Andy END_OF_DOCUMENT_TOKEN_TO_BE_REPLACED