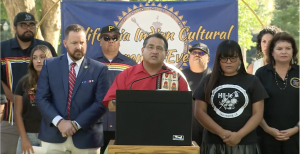 Assemblymember James Ramos (D-Highland), the only Native American elected official in the California Legislature, has been working diligently to get rid of the racist and derogatory word, “squaw,” which derisively referenced Native American women since the 1600s.

Ramos says the “S-Word” is a slur, which has been used to name public places like “Squaw Valley,” the popular Lake Tahoe ski resort. It is hurtful and offensive to Native Americans, he says, particularly Indigenous women.

On Sept. 23, California Native American Day — which is now a paid holiday in the state — Gov. Gavin Newsom signed several bills to support California Native communities, including Assembly Bill (AB) 2022, which will remove the “racist and sexist slur S-Word,” from all geographic features and place names in California, the governor’s office stated.

The negative connotation in reference to Native Americans is as disturbing as directing the N-word at the Black community but it’s been used more commonly in naming public and commercial spaces.

“It is an idiom that came into use during the westward expansion of America, and it is not a tribal word,” Ramos said in a statement.  “For decades, Native Americans have argued against the designation’s use because behind that expression is the disparagement of Native women that contributes to the crisis of missing and murdered people in our community.”

According to the U.S. Census, California is home to more Native Americans with a population of 757,628 (1.94% of the state’s total population) than any other state. Oklahoma is the second highest with a Native population of 523,360.

The bill was sponsored by the American Civil Liberties Union CA (ACLU), Restorative Justice for Indigenous Peoples and Renaming S-valley Coalition, and Alliance for Boys and Men of Color (ABMoC).

ABMoC is a national network of more than 200 advocacy and community organizations that banded together to advance race and gender justice by working to transform policies that are failing boys and men of color and their families.

AB 2022 requires every state agency, local governing body, or political subdivisions in this state to identify all geographic sites, public lands, waters, and structures under its jurisdiction containing the S-word.

Leaders of Native American tribes from across California, joined Newsom when he signed AB 2022 and four other bills in an effort to build on his Administration’s work to promote equity, inclusion, and accountability throughout the state.

“As we lift up the rich history and contributions of California’s diverse tribal communities today, the state recommits to building on the strides we have made to redress historical wrongs and help empower Native communities,” Newsom stated after signing AB 2022. “I thank all the legislators and tribal partners whose leadership and advocacy help light the path forward in our work to build a better, stronger and more just state together.”

Born on the San Manuel Indian Reservation, where he still resides, Ramos is a member of the Serrano/Cahuilla Tribe. He represents the 40th Assembly district which includes Highland, Loma Linda, Mentone, Rancho Cucamonga, Redlands, and San Bernardino.

Two years ago, Newsom signed AB 3121, the California Task Force to Study and Develop Reparations Proposals for African Americans. The bill was authored by Secretary of State Shirley Weber when she was a member of the Assembly.

Similar to the harm many Black Californians have suffered, Ramos spoke of the “atrocities and genocide” Native Americans in the state have endured at the 2022 Third Annual California, Indian Cultural Awareness Event held on the grounds of the State Capitol in Sacramento.

Ramos and other speakers acknowledged that the property the State Capitol sits on is Miwok tribe’s land.

“We’re trying to educate the legislature of the true history and culture of California Indian people,” Ramos told California Black Media. “It’s that important for us to talk about our culture to explain who we are. If we don’t come out to speak to these issues, those in the state of California will make assumptions about our way of life.”

Ramos added that more than 100 places in California contain the S-word. The United States Department of the Interior earlier this month renamed about 650 sites that have been using the slur on federal lands. The states of Montana, Oregon, Maine, and Minnesota have already banned the word’s use.

“The sad reality is that this term has been used for generations and normalized, even though it is a misogynistic and racist term rooted in the oppression and belittling of Indigenous women,” Garcia stated. “AB 2022 begins to correct an ugly and painful part of our history by removing it from California’s landmarks; it’s the least we can do to help our indigenous women heal.”

The Governor also signed four more tribal measures presented by Ramos, including AB 923. The bill requires state agency leaders to undertake training in properly communicating and interacting with tribes on government-to-government issues that affect them.

“California is ranked No. 7 in the country in terms of unsolved murders and missing people,” Ramos said.

AB 1703, the California Indian Education Act, encourages school districts, charter schools, and county offices of education to engage with the tribes in their area to provide the accurate and complete instruction about the tribes’ culture and history and share instructional materials with the California Department of Education.

AB 1936 authorizes the University of California Hastings Law College to remove the name of its founder, Serranus C. Hastings, from the school’s name. The bill specifies restorative justice measures for the Yuki and Round Valley Native Americans in Northern California whose ancestors suffered mass homicides orchestrated by the college’s founder in the 1850s.

Raven Cass, a youth advocate for the San Manuel Band of Mission Indians, said Ramos and the legislators who worked with him to pass the bills, “made great strides” in the past year “to protect sovereignty and safety in Indian country.”

They were encouraged by the Native Americans’ concerns and strongly took them into consideration, she said.

“This is the power of community, the power of unity, and the power of voice when it is determined to make a change,” Cass said at the California Indian Cultural Awareness event in August. “The more we work together the more we can get done. I hope (the legislators) continue to stand with us. Our lives matter and the world should know that.”

“California Black Media was supported in whole or in part by funding provided by the State of California, administered by the California State Library.”