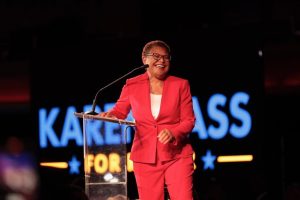 “No matter who you voted for, no matter where you live, I will be a mayor for you,” Karen Bass said in her first press conference as Mayor-Elect.

For the last six months, Congresswoman Karen Bass and billionaire real estate developer Rick Caruso had been locked in a fierce battle for mayor, but this week L.A. voters had the final say and the veteran lawmaker came out on top in what is unfolding as a decisive victory.

With the victory, Bass makes history as the first Black woman—and the first woman— to lead the nation’s second largest city as Mayor.

“This evening, I received a gracious call from Rick Caruso, who is someone who I hope continues his civic participation in the city that we both love,” Bass said in a statement. “I have great respect for his commitment to serving the people of Los Angeles.

“The people of Los Angeles have sent a clear message: it is time for change, and it is time for urgency.  This is my home, and with my whole heart, I’m ready to serve, and my pledge to you is that we will hit the ground running on Day One.”

The victory was all the more consequential given that six-term congresswoman—who made history in 2008 as the first African American woman in U.S. history to serve as a speaker of a state legislative body in the California State Assembly—was outspent 12 to one by Caruso, who reportedly spent a whopping $100 million in what is the most expensive campaign in L.A. history.

“You can buy television, radio, newspaper and social media advertising but you can’t buy trust and credibility and that’s the connection Karen Bass has with the majority of voters in Los Angeles,” said Kerman Maddox, who served as Chair of the Bass 4 Mayor Campaign Finance Committee,

“At the end of the day her years of commitment, service and track record of delivering for the community, allowed her to overcome the $100 million spent by her opponent to mislead voters about her record.”

Caruso characterized his campaign as one of the most rewarding experiences of his life.

“While we came up short,” he said in a statement, “we made an indelible impact on this city and its people that will last far beyond the campaign trail or Election Day.

“There will be more to come from the movement we built, but for now, as a city we need to unite around Mayor-elect Bass and give her the support she needs to tackle the many issues we face. Congratulations, Karen, and God-speed.”

By all accounts, Bass will have her work cut out for her with a fractured city council, an affordable housing shortage, rampant homelessness and one of the nation’s highest cost-of-living indexes.

“I ran for mayor to urgently confront the crises our hometown faces,” Bass said. “To the people of Los Angeles, my message is this: We are going to solve homelessness. We are going to prevent and respond urgently to crime. Los Angeles is no longer going to be unaffordable for working families — good jobs and affordable housing construction are on the way. And know this — that work has already begun.

“My administration will bring everyone to the table,” she continued. “The challenges we face affect us all, and all or us must be a part of our solutions.

“Los Angeles is the greatest city on earth. I know, if we come together, hold each other accountable, and focus on the best of who we are and what we can achieve, we can create better neighborhoods today and a better future for our children.”

“Mark my words,” Bass declared. “We will get big things done together.”